United stay top of the pack with resolute win at Villa

Manchester United maintained their spot at the top of the Barclays FAWSL against a resilient Aston Villa on Saturday afternoon.

It can’t be overstated how impressive Manchester United have been so far this season. Always a tight outfit to break down, their second year in the Barclays FAWSL has seen Casey Stoney’s squad push on and add a clinical aspect to the game.

For her part, Stoney has got the balance of her squad just right. The arrival of World Cup winners, Tobin Heath and Christen Press, alongside young Lionesses prospect, Alessia Russo, and Spanish full-back, Ona Battle have given United a strength in depth that wasn’t present previously.

They came into this fixture unbeaten so far in, a run of form that has seen them beat Arsenal and draw with current Champions, Chelsea. Injuries to Russo, Jess Sigsworth, and Martha Harris, and the absence of Press through illness, saw Lauren James get her start, making her 50th appearance for the club at only 19 years of age. 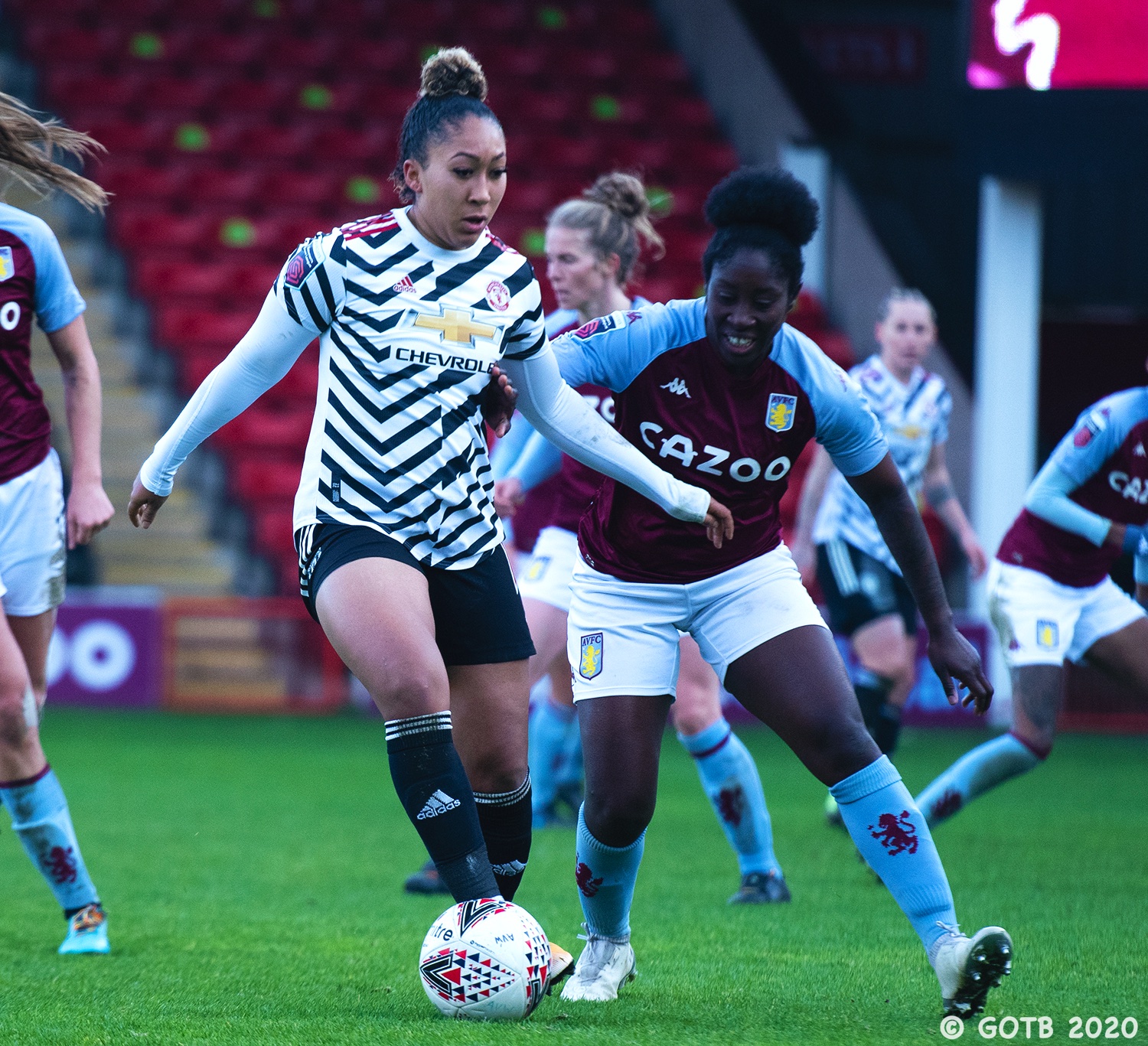 A year behind their opponents, Aston Villa are a work in progress in terms of settling into the top division. Bar their 6-0 defeat to Everton, they have kept things fairly tight, but their lack of creativity and clinical finishing has let them down. They came into this fixture without forward Stine Larsen who was absent due to self-isolation. They lined up with the experienced Anita Asante sitting in the defensive midfield role, with Chloe Arthur dropping to the bench. Sophie Haywood was also given a start in attack.

The visitors were delivered an early blow when Jackie Groenen hit the deck and her head struck a Villa knee. The midfielder was clearly groggy and after some attention, the medical staff decided that she couldn’t continue, much to her frustration. It was an important moment after a week full of discussion around concussion protocols and player safety.

“She took a knock to the head and the doctor deemed that it wasn’t safe for her to carry on so I’ll always make a decision, in regards to player safety. We had to take her off and make a change. I’m a very fortunate head coach when I can bring on the likes of Lucy Staniforth off the bench.”

James was at the heart of everything positive for United in the opening stages. Given a hint of an opportunity, she would turn and glide through the Villa midfield and probably should have had three in the first 15 minutes.

The opener did come in the 25th minute. The ever busy and creative Ella Toone hassled Asante about 20 yards out and found Hayley Ladd. The Welsh midfielder found Leah Galton through the centre with a defence-splitting pass. She rolled the ball with a fine first touch onto her right foot to turn home. 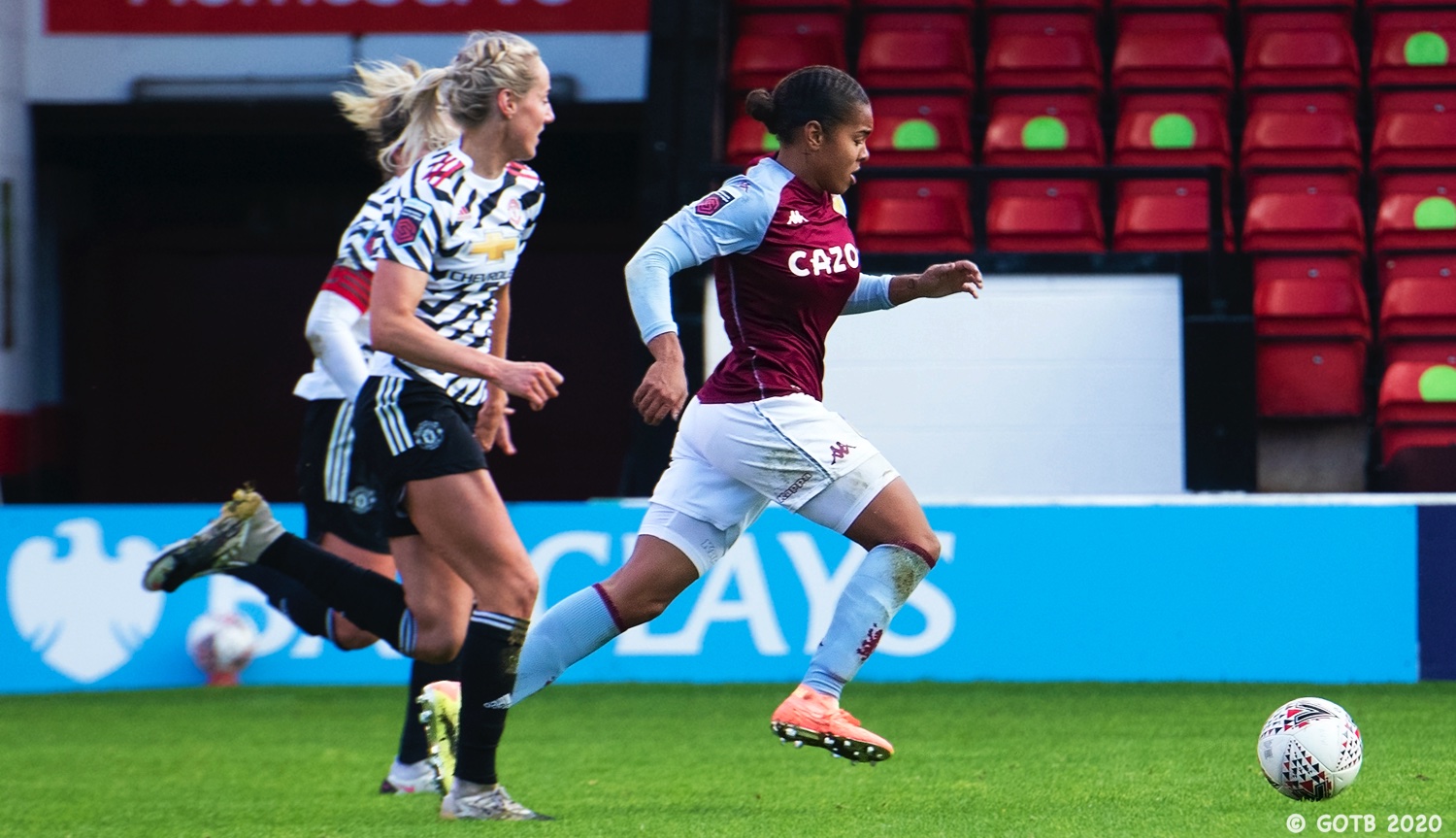 Conceding sparked Villa into life, with Shania Hayles in particular causing problems. One moment saw her motor through the United defence only to be denied by a good block from Mary Earps. She was played through again by Ramona Petzelberger but, on that occasion, sent her effort over the bar.

And the hosts almost equalised immediately after the break. Emma Follis, a live wire throughout, produced a curling effort that was tipped away vitally by Earps. Villa kept up the pressure and the return ball into the box was clipped onto the bar by Hayles from five yards out. It was agonisingly close!

United went up a level and it was soon their turn to be frustrated by the woodwork with Lucy Staniforth sending a trademark long distance effort crashing against the upright. The tireless Heath began to imprint herself onto the game with her endless running and dangerous deliveries. She set up Galton who volleyed over before her knock down in the box was cleared away from Jane Ross on the line.

“Teams that play against us tend to give a little bit more. And also, when you’re sitting at the top of the table, you have a target on your back, don’t you? I knew that Villa would be organised; they’ve got a good manager. I knew we would come here, and they would cause us problems. And they did in the first half, probably more through our lack of positional awareness and defending. But having said that, I thought in the second half, we dominated the game without getting that second goal early enough, really.”

The visitors eventually wrapped it up in the 89th minute when Toone lobbed Lisa Weiss from distance. It was frustrating for the Villa keeper. She had made a good clearance when Heath was played through but couldn’t get back in position in time for the return effort. With that, United sealed the three points with another performance that was indicative of their season so far. 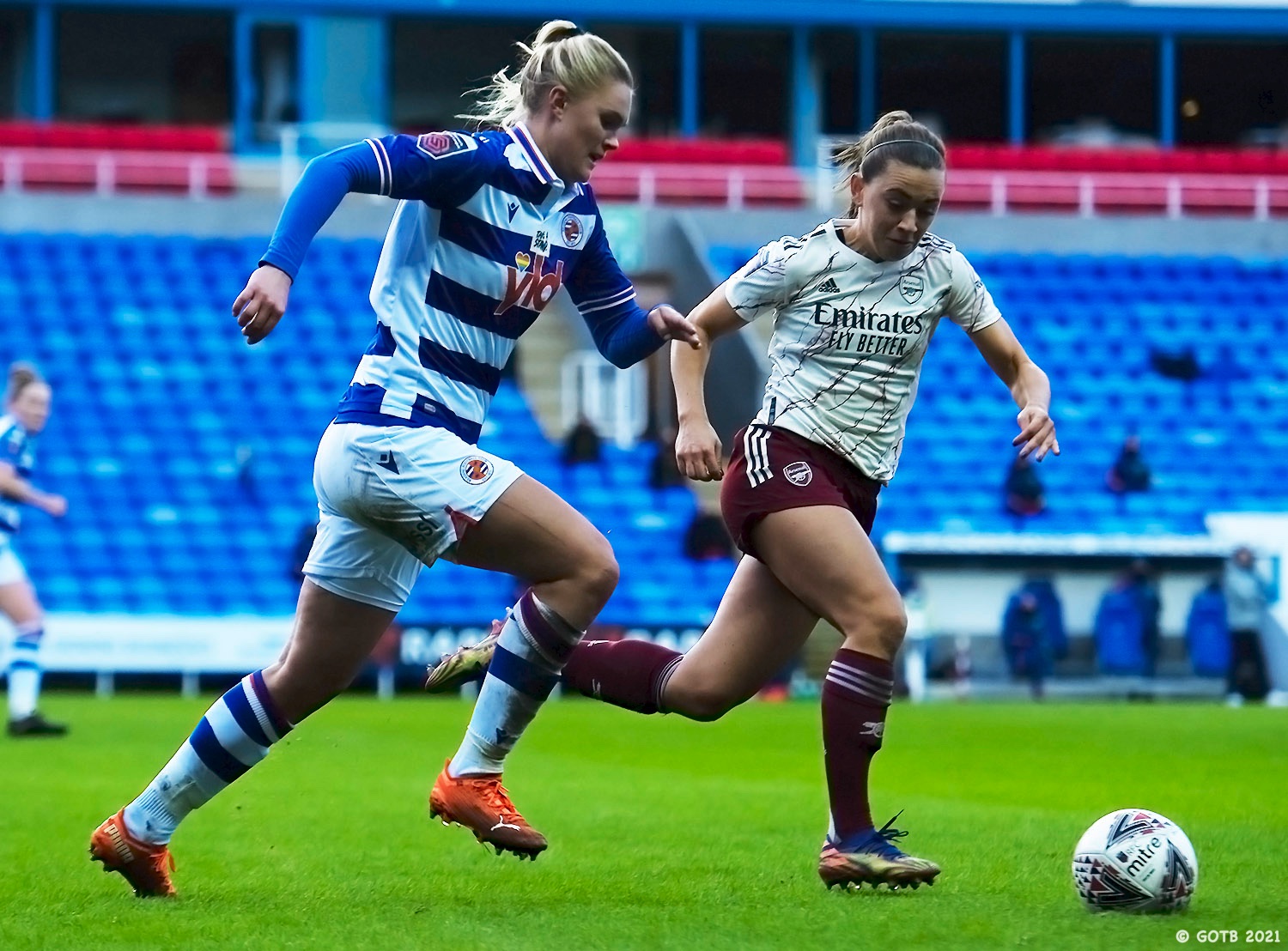 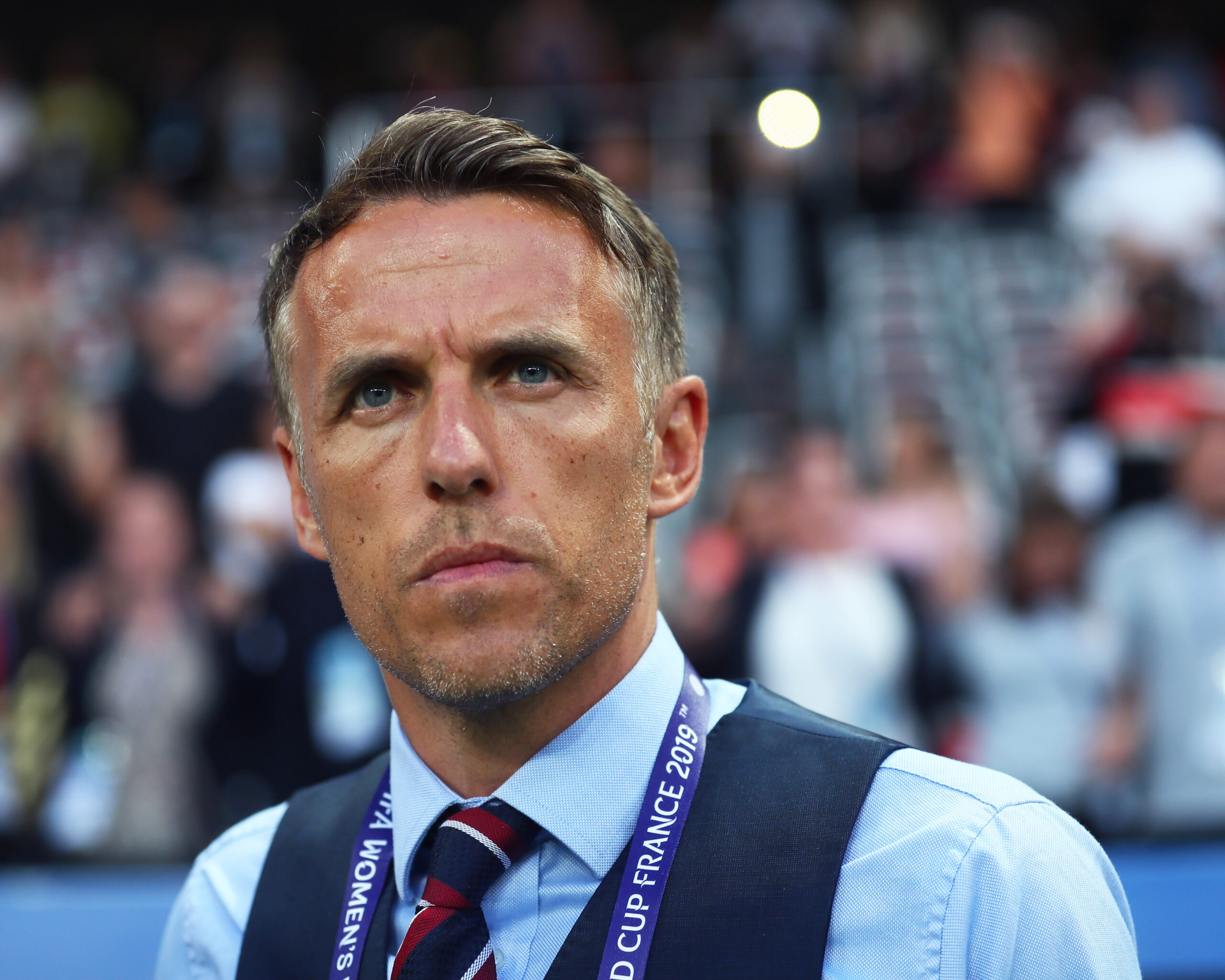 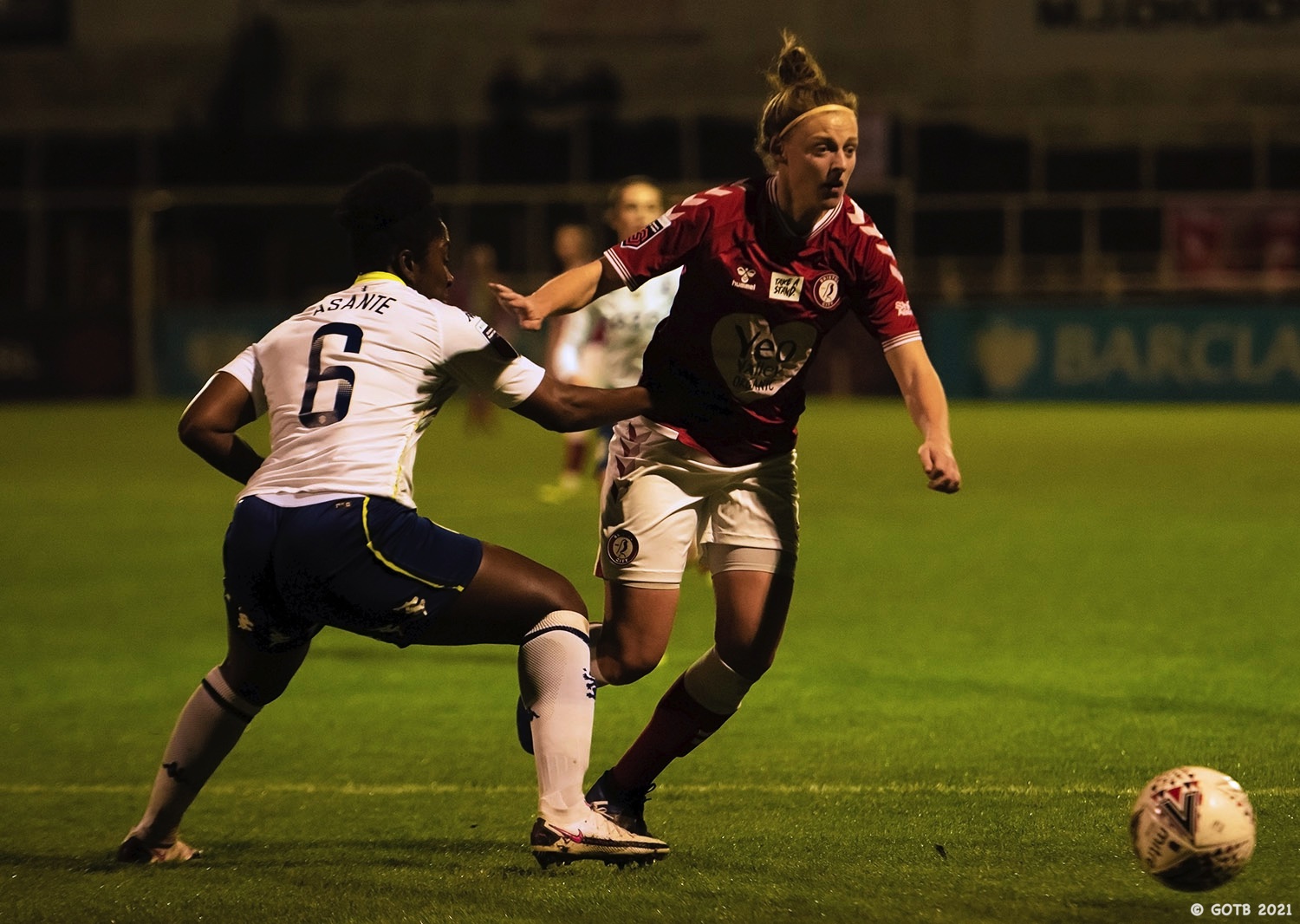